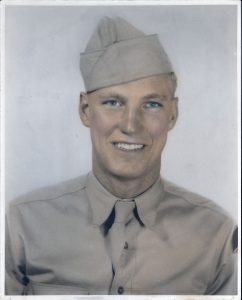 S/Sgt. Jonah Edward Kelley was a member of the 311th Infantry of the U.S. Army 78th Lighting Division. Kelley was serving in Germany with his unit and was fighting a fierce battle to overtake the village of Kestemich. He led E Company in an intense and deadly attack in the village in a house-to-house campaign.

Kelley was wounded twice during an ambush and couldn’t use his left arm. He ordered his men to a position of relative safety and in the midst of fire was able to single-handedly bring the battle to a close. Kelley died in the process of saving his men; as a result, he was posthumously awarded the Congressional Medal of Honor.

“In charge of the leading squad of Company E, he heroically spearheaded the attack in furious house-to-house fighting. Early on 30 January, he led his men through intense mortar and small arms fire in repeated assaults on barricaded houses. Although twice wounded, once when struck in the back, the second time when a mortar shell fragment passed through his left hand and rendered it practically useless, he refused to withdraw and continued to lead his squad after hasty dressings had been applied. His serious wounds forced him to fire his rifle with 1 hand, resting it on rubble or over his left forearm. To blast his way forward with hand grenades, he set aside his rifle to pull the pins with his teeth while grasping the missiles with his good hand. Despite these handicaps, he created tremendous havoc in the enemy ranks. He rushed l house, killing 3 of the enemy and clearing the way for his squad to advance. On approaching the next house, he was fired upon from an upstairs window. He killed the sniper with a single shot and similarly accounted for another enemy soldier who ran from the cellar of the house. As darkness came, he assigned his men to defensive positions, never leaving them to seek medical attention. At dawn the next day, the squad resumed the attack, advancing to a point where heavy automatic and small arms fire stalled them. Despite his wounds, S/Sgt. Kelley moved out alone, located an enemy gunner dug in under a haystack and killed him with rifle fire. He returned to his men and found that a German machinegun, from a well-protected position in a neighboring house, still held up the advance. Ordering the squad to remain in comparatively safe positions, he valiantly dashed into the open and attacked the position single-handedly through a hail of bullets. He was hit several times and fell to his knees when within 25 yards of his objective; but he summoned his waning strength and emptied his rifle into the machinegun nest, silencing the weapon before he died. The superb courage, aggressiveness, and utter disregard for his own safety displayed by S/Sgt. Kelley inspired the men he led and enabled them to penetrate the last line of defense held by the enemy in the village of Kesternich.”

Ed’s father and mother, Jonah and Rebecca Kelley, accepted the Medal of Honor for Ed in September, 1945.

Memorials to Kelley have been constructed at the sites of both 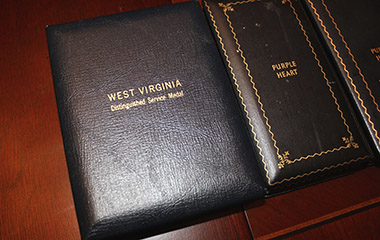