Kelley was born in Rada, West Virginia, on April 13, 1923, and grew up in nearby Keyser.  He was the middle child and only son of Jonah and Rebecca Kelley; his two sisters were Beulah and Georgianna. A sports enthusiast, Kelley played football and basketball while attending Keyser High School and also participated in Boy Scouts and activities through his church, Grace United Methodist. After graduating from high school, he entered Potomac State College where he played on the football team until being drafted into the U.S. Army in 1943.

Sent to Germany, Kelley served as a staff sergeant with the 311th Infantry Regiment of the 78th Infantry Division.  The division had been fighting for weeks to take the village of Kesternich, south east of Aachen, because occupation of the village would also give control of the nearby Roer River dams.

During intense house-to-house fighting on January 30, 1945, Kelley led a squad in repeated assaults on German-held buildings. Although he received two wounds, one of which disabled his left hand, he did not withdraw to seek medical attention but continued to lead his men. The next morning, he single-handedly sought out and killed a German gunner who was preventing his squad’s advance before being killed while assaulting a second German position. For these actions, he was posthumously awarded the Medal of Honor eight months later, on September 10, 1945.

Aged 21 at his death, Kelley was initially buried in Margraten, Netherlands. After the war his remains were returned to the U.S. and interred at Queens Point Cemetery in his hometown of Keyser, WV.

Edward & Paulina were very close friends. She was first to notify Eddie he would be drafted to WWII. 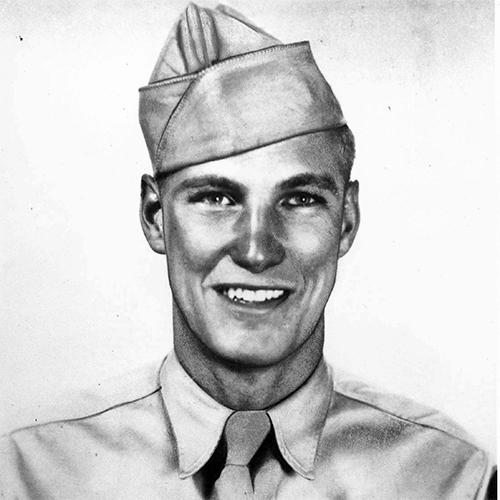 A Pre-Deployment photograph taken of Eddie prior to war. This photo has since been used on all public domains.

The funeral did not happen until 3 years after his death. His body was originally buried in Margraten, Netherlands.

Several structures have been named in Kelley’s honor: